CHICAGO, IL David Bjorlin is a pastor of worship at Resurrection Covenant Church in Chicago and adjunct lecturer in worship at North Park Theological Seminary. This article was originally published on the Commission on Biblical Gender Equality blog.

Growing up as a pastor’s kid in a Pentecostal church in northern Minnesota, I spent an inordinate amount of time in church. And in that tradition, sermons were not a fifteen-minute homily but at least a forty-five minute ordeal. With an attention span that usually ran out just as the preacher was working his way out of the introduction (in this tradition, it was always “he”), much of my time in church was spent looking for creative but quiet ways to pass time that seemed to have slowed to a crawl. Sometimes this was accomplished through vivid daydreaming; I would later resonate with the Wendell Berry character Jayber Crow who noted, “Some of the best things I have ever thought of I have thought of during bad sermons.” 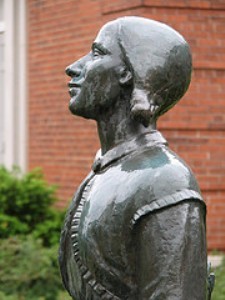 But one of my favorite pastimes during sermons of indeterminate length was to grab the unused, dusty brown hymnal in front of me (the Assemblies of God’s Hymns of Glorious Praise) and leaf through its contents. During one of these forays into the hymnal, I noticed that one name seemed to recur with some regularity: Fanny J. Crosby. During a particularly long and arduous sermon, I set out to count how many hymn texts were written by this ubiquitous woman (21, in case you were wondering!). The search also brought to light hymn texts by Cecil Francis Alexander (“There Is a Green Hill Far Away”), Frances Ridley Havergal (“Take My Life and Let It Be” and “Like a River Glorious”), Louisa Stead (“’Tis So Sweet to Trust in Jesus”), and those translated from the German by Catherine Winkworth (“Praise to the Lord, the Almighty” and “Now Thank We All Our God”), to name but a few. While at the time I didn’t notice the irony, I later came to realize how strange it was that in a tradition where women were banned from the pulpit, we had a hymnal chock-full of texts written by women.

Now that I spend a good amount of time formally studying hymn texts, I continue to be drawn to these nineteenth-century texts written by women. In a period when women were banned from pulpits and given very little voice in the worshipping life of the church, it was through hymn texts that many of these women proclaimed the word in worship; through hymn texts, women preached! In her book Preaching From Home, Luther Professor and hymn text writer Gracia Grindal opens with a story from the Lutheran reformation that underscores this point:

According to legend, Elisabeth von Meseritz Cruciger, wife of Martin Luther’s student Caspar Cruiger, and writer of the hymn “The Only Son from Heaven” (“Herr Christ der eying gots son”) dreamed that she was standing in the pulpit of the city church in Wittenberg preaching. When she told her husband about her dream, he assured her that when they sang her hymn in church, she was, in fact, preaching.

For Elisabeth and hundreds of other women, writing hymn texts was not simply an act of spiritual devotion, but also a subversive act in which the silenced voice of women was put into the mouths of the entire congregation in song and became a sung sermon.

Understanding these hymn texts as subversive proclamations of the word can also help us do away with the caricature of the nineteenth-century woman hymn writer, often portrayed as a sickly and weak, though pious, woman who wrote hymn texts to buoy her spirits. For instance, in our own tradition, this seems to be the idea many have of Swedish poet and hymn writer Lina Sandell (known for “Children of the Heavenly Father” and “Day by Day and with Each Passing Moment,” among others). Often she is pictured as a consumptive young woman daydreaming in a tree in rural Sweden while waxing poetic about her faith. Though she was prone to illness, Sandell was a woman of great learning, reading and writing in Swedish, Norwegian, French, German, and English. She also worked tirelessly as an editor for a Christian publishing house in Stockholm while writing her over 2,000 hymn texts and poems. Far from a sickly country girl who had a way with words, she was an intelligent and industrious woman whose work was crucial to the spiritual revival in Sweden.

Further, many of her poems also stretched the traditionally male images and language used for God. In her first published version of “Day by Day and with Each Passing Moment,” she wrote that God “bears for me a mother’s heart” (it was later changed by her publishers to “father’s heart”). In another song, she calls Jesus “Father, mother, home, and future,” and even published a hymn with the title, “Now I Will Sing of the Mother’s Wings.” In our contemporary theological landscape where many are noting the limitations of exclusively male language for God, Sandell can be an early source in our own tradition from which we can glean. (all details on Sandell come from Gindal’s Preaching From Home.)

So, the next time you are singing a hymn in church, look down to the bottom left of the page and see who wrote it. Was it a woman? Was the text written in a time when women couldn’t preach or teach in church (which is still true, whether implicitly or explicitly, in too many Christian traditions)? If so, you hold not only a beautiful piece of Christian history and poetry, but a subversive sermon that, when sung, allows the voices of these preachers to continue to reverberate through the centuries, proclaiming the word of God to the people of God. Thanks be to God!