From Sand Dams to Sorghum

Self-help groups and sustainable development make a difference in Kenya.

Traveling the Kenyan roads of West Pokot can be venturesome – not an exercise for the faint of spirit or weak in constitution. The terrain is rugged, filled with sudden dips, treacherous inclines, and sizable boulders. Occasionally, there is no road at all.

The words of Spanish poet and literary figure Antonio Machado rang in my head as we traveled from Kitale to Kapenguria, and into the remote villages of West Pokot, Kenya: Caminante, no hay camino. Se hace camino al andar. “Wanderer, there is no road. The road is made by walking.” Quite literally, in those villages the path is made as you go.

As a member of the Covenant World Relief (CWR) advisory team, I had the privilege of traveling to West Pokot last January to visit several CWR “partners in transformation.” One such partner is Jitokeze Wamama Wafrika, a community-based organization. 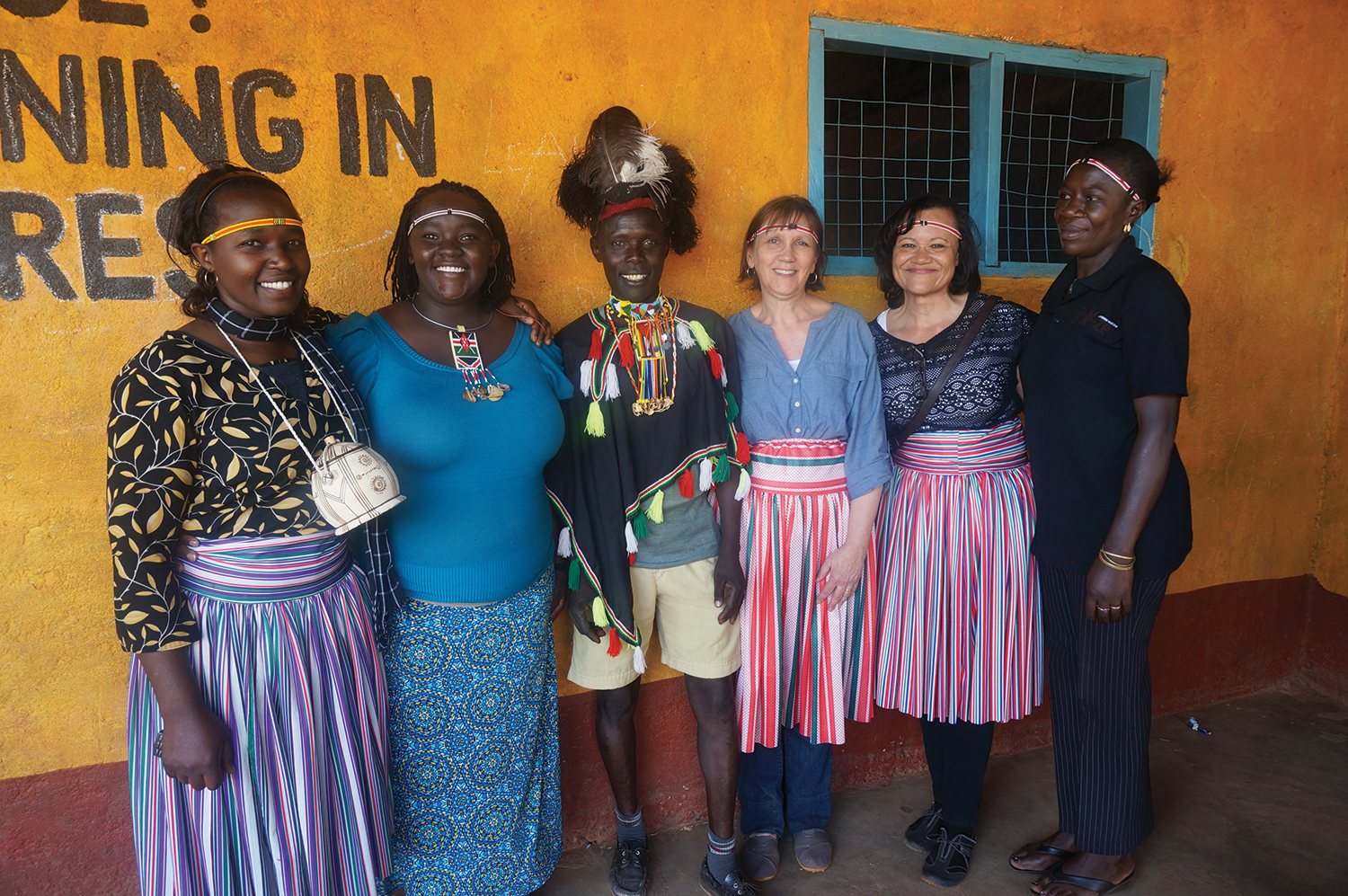 Founded in 2010, Jitokeze promotes sustainable development through improving food, water, and income security in the drought-prone, semi-arid lowlands of West Pokot County. Approximately 49 percent of this county’s population lives in absolute poverty, according to the Kenyan National Coordinating Agency for Population and Development. Families in these areas experience great obstacles in securing access to food, water, income, and peace from conflict.

Founder and executive director Philipine C. Kidulah explains that Jitokeze also promotes social and economic empowerment, environmental restoration, and peace within the community. “The vision of Jitokeze is to see a world where everybody has an equal opportunity to live a life in its fullness,” she says. “We recognize that in many ways in the community, women do not have that opportunity, and that is why we decided to focus on them, with the purpose of empowering them to build a food system that is sustainable, and nurturing a community that is able to deal with the challenges of conflict and environmental degradation, and overcome those challenges.”

Pini, as she is known, recalls an upbringing linked to hunger, poverty, and conflict. She experienced the vulnerability of her community due to the impact of severe drought. She also witnessed how those circumstances could be changed. After receiving an education in the United States, Pini made a path back to her homeland of West Pokot. “Few bring transformation back to the community,” she said during a recent visit to the States. “I have received so much, and it is my responsibility to redistribute, to share my capacity.” Pini worked together with Christine Buettgen to start Jitokeze. Buettgen, project manager of Covenant Kids Congo, was a short- term missionary at the time.

“Pini is a force in her community,” Buettgen says. “Her presence is powerful because she is a true servant leader. She does not take credit for the amazing things Jitokeze has accomplished in such a short time. She knows that change comes through building a community of empowered minds and hearts, and that is how she has led this organization. Pini embodies grace, and that is reverberated throughout Jitokeze. Her community has taken notice, and the bonds of trust are growing stronger every day. Sustained change is built on this trust.”

Jitokeze and CWR began a partnership in 2012 through a project called Building Capacity for Sustainable Food Security. Focusing on four basic components, Jitokeze provides relief and development in the following areas:

Income Security. Through the development and management of chicken microenterprises (a project that began as Hatching Our Way Out of Hunger), the organization partners with eighteen groups of mostly women to increase the production of indigenous chickens and their products. Jitokeze also houses and facilitates a tailoring project for women and girls who do not have access to land to generate food and income.

Water Security. Jitokeze is teaching communities how to harvest rainwater and construct sand dams to harness flood water for irrigation.

Peace-building. With biblically based curriculums, Jitokeze teaches villagers how to work together to detect and deal with issues of injustice that are the root causes of conflict and violence.

Self-help and common interest groups undergird much of Jitokeze’s ministry to women as they become more aware of the impact of both climate change and socioeconomic disenfranchisement on their wellbeing. They participate together in literacy programs, micro-enterprise development, microloan programs, and community organizing. Jitokeze is also developing agro-interest groups among men in the villages.

In January, we were hosted in part by Perpetual Yator, a Kenyan woman with an enormous smile and a warm, compassionate spirit.

She told us that two years ago she could not have imagined that she would have her own farm, tend her own crops, own her own business, become educated, and have a voice in her home. Sponsored by Jitokeze, Perpetual will receive a diploma this month in bio-intensive and agroforestry method of sustainable farming, and will join the staff of Jitokeze as a trainer for self-help groups involved with the chicken project.

God is at work through CWR, which holds as its core values 1) empowerment, 2) service to the most vulnerable and most in need in community, 3) long-term, holistic, sustainable development, and 4) involvement of local communities. CWR stresses the use of resources present in the community, and works in development as well as relief toward locally initiated and owned projects that equip and train people from the community to be the solution to issues and challenges they face. With active partnerships in more than twentythree countries and involvement in more than sixty community development or relief projects presently, CWR is joining God in transformational mission and ministry to make things right in a broken world, and witnessing God’s power, through ministry partners like Jitokeze, to restore individuals, families, and communities.

Through water-covered rock beds, alongside steep foothills, we made a path to the villages of West Pokot. The women and village leaders met us in each location with overwhelming hospitality, beautiful voices raised in songs of welcome and thanksgiving, the beating of drums, and of course joyful dancing into which we were reluctantly recruited.

“You must go,” a tribal elder coaxed, pointing me to the circle of festivity. “You can never know the steps until you learn to join the dance.”

As I stumbled about haphazardly, I was struck by the sense that our call to, dreams for, and ministry work among local communities at home in North America is not so different really. We engage in a search for globally sustainable lifestyles, justice, peace, and ministries that support restoration, empowerment, and wholeness. Just as in Kenya, we must first engage and empower local communities, listen to their needs, and learn from their homegrown methods. Only then can we achieve real change.

The path is made as you go!